26.11.21: The two iconic clubs of Indian football SC East Bengal and ATK Mohun Bagan will face in the first Derby of the season on Saturday evening at Goa. This match can be reckoned as one of the important and high profile match in the 8th edition of Indian ATK Mohun Bagan had won both the group league matches in a dominated encounter in the 7th edition of the competition. 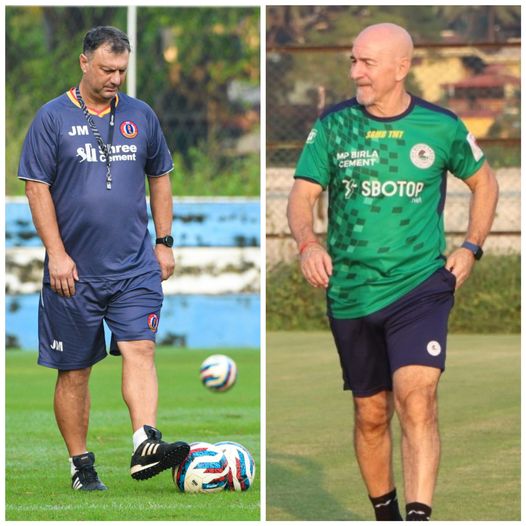 UNDERDOG TAG DOES NOT BOTHER US: MANUAL DIAZ
The Head Coach of SC East Bengal Jose Manual Diaz are well aware of match against ATK Mohun Bagan. In a interaction with the SC East Bengal media before the match Diaz said, The Kolkata Derby is very import ant for us. We know the importance of this particular match, having witnessed a number of them during my Stint in Spain and Mexico."

While answering to a question, SC East Bengal underdogs against ATKMB. Manual Diaz said," The underdog tag does not bother us. We will play to our strong Points. ATKMB is a good team and is helmed by a good coach, who has the experience of playing in ISL. Though ATKMB had a good performance in the last season and have a squad playing for long, but we are ready to face them."

Manual Diaz was asked about the battle between ATKMB attack and SCEB defense. He said, "For me, the whole squad of ATKMB is a threat. No, it’s not only a battle of ATKMB’s attack and SCEB’s defense. ATKMB has been playing well for the last few seasons whereas SCEB has played only one season so that’s the only difference."

SC East Bengal is ready for the Derby with different option in the armory. Regarding the formation of SC East Bengal Manual Diaz said, "We are working on different options and combinations because there are many matches that we will have to play in a short period, so we are keeping all the options open. We must be strong, give good secure passes and create opportunities in the attacking half because it became difficult if we defend the entire time against ATKMB. Our focus will be on minimizing mistakes and capitalizing on the weak point of ATKMB. Will depend on the situation of the match area and where the ball is. If the ball is close to our box, we’ll mark man-to-man."

As Manual Diaz was answering regarding Roy Krishna and Hugo Boumous, he said "We are playing against ATKMB rather than only against Krishna and Hugo. Yes, they are good players who can score goals but they need the whole squad to help them. So we’re making plans to stop the whole team instead of only concentrating on Hugo and Krishna." 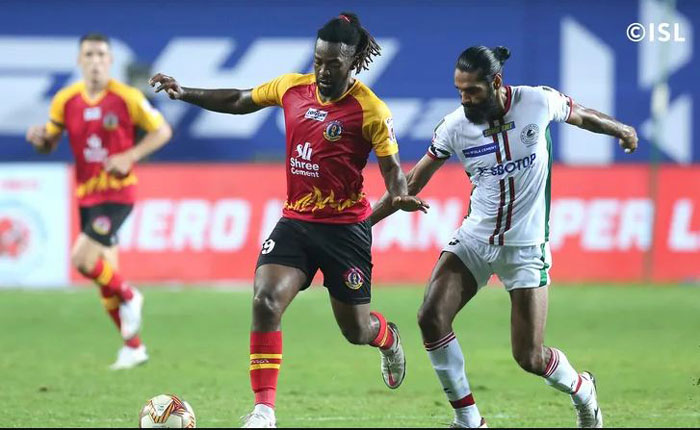 WE WILL ADOPT PLAN ACCORDING TO THE CONDITION: HABAS
ATK Mohun Bagan after winning the first match against Kerala Blasters FC by 4-2, are confident to face their arch rival on Saturday evening in an ISL Derby. In a virtual meeting with the ATKMB media the Spanish coach Antonio Habas answered some important question in the pre match press conference.

While interacting regarding SC East Bengal and Derby Antonio Habas said, I realise that East Bengal is a team in transition. The footballers and coach are new. It will take time to improve . For us, Derby match is always important . Though we have to play in a close door stadium. "

ATK Mohun Bagan won both the Derby in the seventh edition of the tournament. While answering regarding the chance of his team, Antonio Habas said, "We want to win the match. But history may not repeat. We have to adopt plan according to the condition and necessity of the match. Our target is to earn full points."

The footballers of SC East Bengal, Antonio Perosevic and Daniel Chima likely to create problem in ATK Mohun Bagan's defense. The Spanish coach feels that his strategy can stop East Bengal's strikers to create danger. Antonio Habas while answering said, " There will be no man to man marking . We have to play with the same intensity for the entire 90 minutes.We have some specific plan for some footballers."

The match will be played close door for the second consecutive season at Goa.

WE WILL NOT LEAVE ANY STONE UNTURNED IN DERBY: FRANJO PRCE

24.11.21: The Croatian centre back of SC East Bengal Franjo Prce scored an important goal in the first match against Jamshedpur FC in the opening match. SC East Bengal are now preparing to play against ATK Mohun Bagan on 27th evening in the Kolkata Derby. 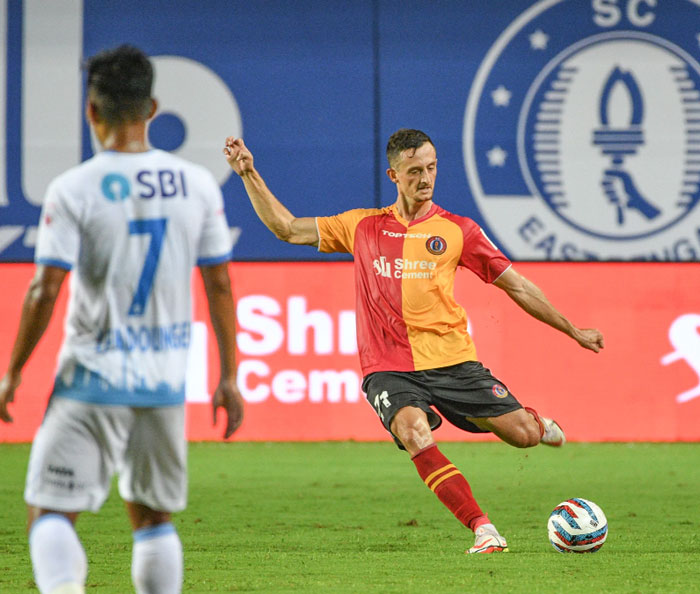 In an video interview released by SC East Bengal, Franjo Prce discussed the importance of Derby in his very first season with SC East Bengal. The Croatian centre back said, “We will fight for every ball, and give our all. We won that game 1-0, so when I scored against Jamshedpur FC, I hoped we would win too, but it didn’t happen."

The Croatian central defender feels that his team has to devolope in different areas. He said, “There are many areas we would like to improve on. We all make mistakes, but we are training hard and preparing for the game in the best way. All the players look focused and know what this match means for the fans. We want to win this derby for them and, hopefully, we can celebrate together after the game.”

Franjo Prce are well aware of the importance of Derby. While interacting he said, “I watch all the matches of the ISL. At half-time, there’s always some reference to the derby. The Indian players in our squad are continually speaking about this game, about ATK Mohun Bagan, so I know how significant this match is not only for the people of Kolkata, but for the whole of India.”

In his massage Franjo Prce said, “We will give our 100 per cent and fight for every ball. Anything can happen in football, but we will leave no stone unturned to bring a smile to your faces. Joy East Bengal!”

SC EAST BENGAL IS A FORMIDIBLE SIDE: ROY KRISHNA 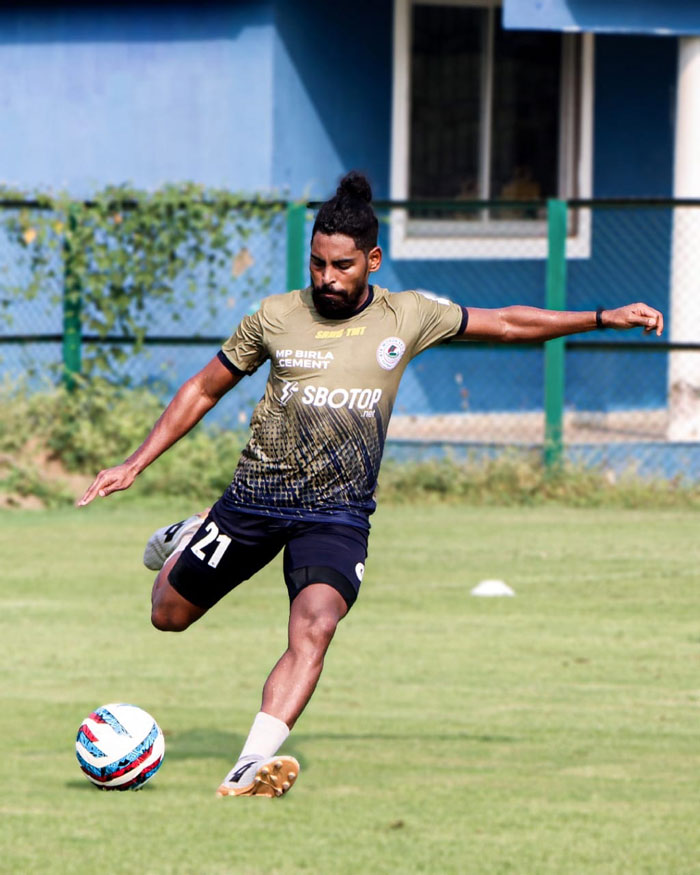 As he was discussing about SC East Bengal, Roy Krishna said, " I watched the first game of SC East Bengal and I think they have a formidable team this season. They have a good and solid backline and having Arindam as a goalie who was the best keeper last season is an advantage for them."

Regarding the performance of his team in the first match against Kerala Blasters FC, Roy Krishna said, "I think we did well in the first half but the second half could have done well with more focus. However, it was our first match and we are still learning to play alongside each other, especially with the new players who’ve joined us. The coach has tasked us to re-evaluate our performance and work out a better plan for the next match. We will be taking it one match at a time and will be strategizing accordingly."

Roy Krishna was combining well with Hugo Boumous in the last match. He said, "I think Hugo is a playmaker and he creates a lot of chances for us. He made some good touches in the last match and scored a brace. I really enjoy playing alongside him and I look forward to creating some good memories on the field with him."

ATK Mohun Bagan supporters rely on Krishna for goals in the Derby. He scored in both the matches last year. Regarding his expectation in the Derby Roy Krishna said, "First and foremost, my expectation is always to help my team win, whether it’s through a goal that I score myself, an assist, or by defending, I always have the goal to win. It’s also my personal challenge to increase the number of goals I score so I can keep improving every match."

23.11.21: The two iconic clubs of Indian football SC East Bengal and ATK Mohun Bagan will face the challenge in the first Derby of the season on Saturday afternoon at Goa. This match can be reckoned as one of the important and high profile match in the 8th edition of Indian Super.

Though this is the third match between the century old clubs in ISL, but SC East Bengal and ATK Mohun Bagan had played more than three hundred crucial matches since 1921 in different parts of the sub continent since the first match played in 1921.

ATK Mohun Bagan had won both the group league matches in a dominated encounter in the 7th edition of the competetion.

The arch rivals had played a game each before the Derby. ATK Mohun Bagan won the first match against Kerala Blasters FC by a margin of 4-2, while SC East Bengal shared points with Jamshedpur FC as the match ended in a 1-1 draw. This is the second consecutive year when the ISL Derby is playing out of Kolkata and in a close door stadium. The fans of both the clubs will have to enjoy the live actions of the match in different channels and in web portals.

FSDL had organised a number of ISL matches since 2014 to 2019, but the Kolkata giants SC East Bengal and ATK Mohun Bagan are yet to play single a match in their Home gound at the City Of joy. The organisers were forced to organise the matches in a single venew owing to Covid 19 pandemic. Earlier, a National League match between the arch rivals in the year 1999 played at the Fatorda stadium, Margoa.

The footballers of ATK Mohun Bagan and SC East Bengal are enthusiastic, emotional and eagerly waiting to play the Derby on Saturday evening. The footballers expressed their views in their respective club media.

PRITAM KOTAL
"This match is always important being a son of Bengal. I have played many derby matches. I know how happy the fans get when we win this match. This year our style of playing has changed. We will win, we shall play with this attitude. We have to win."

AMRINDER SINGH
"The Kolkata derby is one of the biggest matches in Asian football. I know how important this match is to the Mariners. It is our job to make them happy. My excitement has increased, thinking that I will play this match for the first time with the green-maroon jersey. This match is special and that's why as a footballer, the whole team and I want to give our best. However, in this match, there will be tough fighting. It cannot be won easily."

SUBHASISH BOSE
"Derby drives any Bengali footballer like me with emotion and excitement. But I never let emotion overrule the game. It is just another match for me. We have to win this match like any other match. Preparations have started on how the coach will make the team play. I want to think about Derby for now. The supporters are happy when the team wins."

MOHAMMED RAFIQUE
"It is always an excitement to play a Derby between SC East Bengal and ATK Mohun Bagan. I request all the SC East Bengal supporters to stay with us and support."