New Market FC last major title came in 2006 when it lifted the Sekrenyi League trophy. Since then New Market FC could not win any more trophies, though on several occasion it came near to finished runner-up in various tournaments such as Runner-up in 12th Youth Soccer Cup in 2006, runner-up in 18th Royal Gold Cup in 2008.

New Market FC also finished runner-up in 16th and 17th Classic Cup in 2010 and 2011 respectively. New Market Football team, Kohima established in 1977, is 40 year-old Club, following its participation in Sir C.R Pawsey Trophy. Since then, the team has been consistently participating in all the major tournaments organized in the district and State. The team has been a sprint board which provided many players the opportunity to represent the State team, which has brought many laurels to the State.

NMYO President Vikholie Yiese says the team will try its best to regain its lost glory in the game of football to which the colony is popular amongst the denizens of the state capital Khriekesa FC will also be inching closer to lift its first Cup in its Club history.

Khriekesa Football Club established a humble beginning in 2017 yet aiming for the zenith. It started out with young football aspirants and lovers in tally primarily to promote and safeguard its players for better and broad exposure to greater heights and anticipating laurels, self sacrificing, determination and hard work was expected from one and all members.

Dr.Nicky Kire, Honourable Minister of Roads and Bridges, Govt of Nagaland has consented to grace the occasion as Guest of Honour on Final Day of KTC Cup 2017 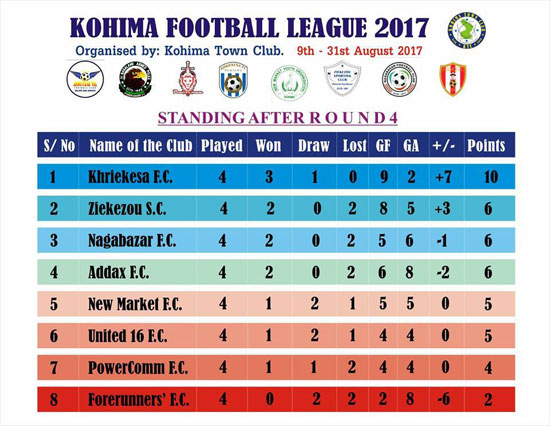 School captains, unite together to play for New Market

Addax FC made a brighter start of the two teams and had their opportunity in the first half when Imlong Chaba went one on one with the keeper but shot the ball wide. The team was paid by a defensive error as Khriekesa FC seized the opportunity and broke the deadlock when Petevizo scored the first goal in the 22nd minute.

Addax FC despite better ball possession and attacks, failed to seize the opportunities that came their way find and the first half ended 1-0 in favour of Khriekesa FC.

With just 30 second introduced in the second half, Neiphrezolie Usou scored the second goal for Khriekesa FC to double the lead and Petevizo with his brilliance converted a goal as his team mate latches a through ball five minutes later to make it 3-0.

Addax applied pressure to find the back of the net but failed to breach the defensive line. They had their best chance when Chaba hit the woodwork in the 80 minutes. At the end of the final whistle, Khriekesa got their three points.

Three sets of brothers from Khriekesa FC were in the first eleven line-up as the team showed their class in the game and beat the rival with a treble.

Vizovor Liezietsu, team coach for Khriekesa FC said despite deplorable condition of condition, he was happy that the team was able to get the three points in the first match. 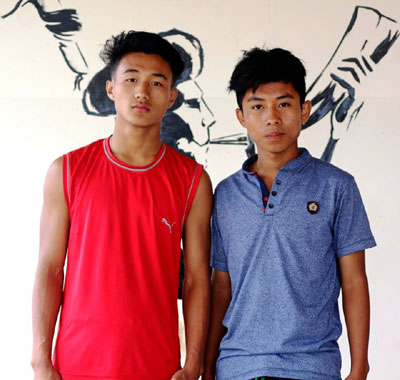 School captains, unite together to play for New Market

Both won accolades for their respective schools, displaying high sports men spirit in the beautiful game of Football. Evidently fans of both players from their schools were shouting and screaming for one the of the upcoming Naga football talents. Donning jersey 99 Gideon Leo was the school football captain for Ministers Hill Baptist Higher Secondary School, Kohima and Viluto Sumi donned jersey 9, captain for his school Mt Sinai Higher Secondary School, Kohima. Both played as strikers and even notching up some one of the most amazing goals of the tournament. Incidentally both the schools reached the semi-finals and lost to their rival opponents schools.

Back in unison Gideon and Viluto will be donning the jerseys for the their favourate local club - New Market XI for the upcoming Kohima Football Legaue,2017, organized by Kohima Town Club(KTC).

New Market XI is one of the oldest football clubs in the state capital, formed in 1977, with its repute of winning several trophies yesteryears in Kohima. 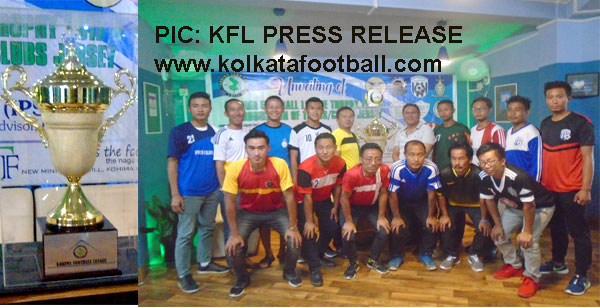 Addressing the gathering, chief guest K.Kire, (IPS) Retired DGP Nagaland and Adviser KTC congratulated the Kohima Town Club for systematically organizing the Kohima Football league and hoped the league will be en eye opener to the Naga footballer to achieve greater height of glory and honour. He also unveiled the KFL Trophy 2017, perhaps one the biggest running trophy in the state for any tournament.

The eight teams/ clubs also introduce their respective jerseys before the distinguished gathering. The tournament league Football balls are sponsored by G. Sports, Dimapur. The oath the clubs was administered by Kevilebei Paphino, Convenor Technical Committee. The program was chaired by M.Mathew Yhome, secretary Organizing Committee Krodi , General Secretary proposed the vote of thanks .

The teams will play a single tier league to decide the KFL, 2017 champion. Cash prizes for the top four teams in order of ranking in league and individual prizes are in the offing. The Season ticket is fixed Rs.1000/- per head with 5 lucky draw with Gift hampers and the gallery ticket is fixed at Rs.30 per head.

Two matches will be played on a daily basis for about a month and a half, further 40 % of the daily revenue (10 % each to all the 4 teams) will be shared with the local clubs per match.


06.07.2017 : XAV R. : The Kohima Town Club (KTC) on Thursday officially launched the Club logo and season ticket for the upcoming Kohima Football League, 2017 at The Hub. Club Members and officials from participating teams attended the function.

The KTC also informed the football players who are to take part in the Kohima Football League, 2017 are to adhere to the following guideline -Players need to do registration with Kohima District Football Association (KDFA) . Fee is fixed at Rs.50 per head. The Last date has been extended July 15.

The participating Club/Teams are also informed that the League players registration should be done or before July 30. 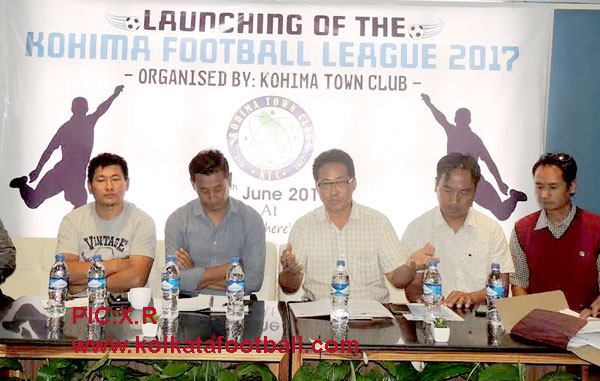 19.06.2017 : XAV R. : The Kohima Football League, 2017 was officially launched on Saturday at Where is The Food (WTF) Naga Diner, near Cathedral Church, Kohima. The league is being organised by Kohima Town Club (KTC) registered under Kohima District Football Association played under the aegis of Nagaland Football Association.

The league matches will begin at Kohima local ground in the month of July however the dates were yet to be confirmed. Two matches will be played on a daily basis for about a month and a half, further 40 % of the daily revenue (10 % each to all the 4 teams) will be shared with the local clubs per match.Dr. Viketuolie Pienyu, President KTC addressing the media.

He said the league was colony based as it was necessary to have a fan base and with all the members of the colony as stakeholders. He also said colony based will be a sustainable venture in the long run. The league will provide the opportunity to all talented players to play competitive football at a professional level as well as provide the platform for the players to springboard to higher clubs in India, Dr. Viketuolie Pienyu stated.

William Koso, Technical Head KTC, said the league will strictly follow All India Football Federation (AIFF) rules and that the team coaches should have at least coaching certificate from AIFF. Koss also said that the clubs bringing outside players from the state should meet the criteria from AIFF to join the teams in Kohima and maintained that the league will run in a systematic manner.