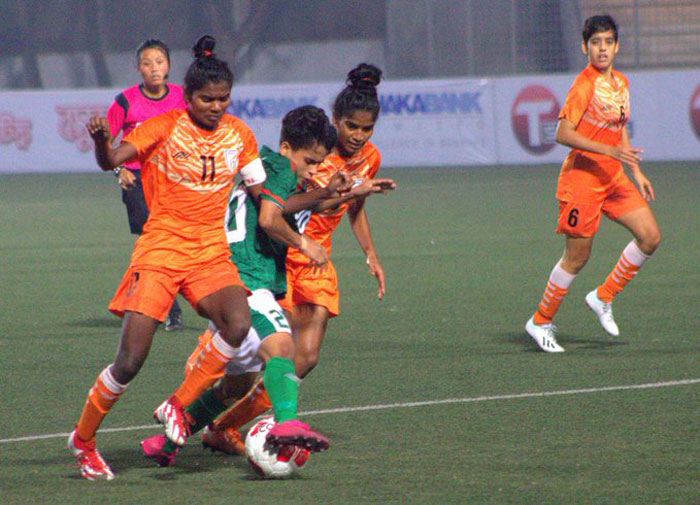 The Indian U-19 girls went down to hosts Bangladesh by a solitary goal in the final of the SAFF U-19 Women’s Championship at the Bir Shreshtha Shaheed Shipahi Mostafa Kamal Stadium, Dhaka on Wednesday, December 22, 202.

The only goal in the game came in the 80th minute where Anai Mogini scored to make the difference between the two teams.

The first chance for India came in the 5th minute where Priyangka Devi collected the ball from a thrown-in on the right side and went for a cross. The ball though did not find any of the players and went straight to rival goalkeeper Rupna’s hand.

In the 16th minute, Bangladesh had their first chance in the game. A long ball was played over the top by Maria and Tohura Khatun collected it and tried to make the most of it but goalkeeper Anishka was equal to the task.

Changing over, the first chance for India came in the 64th minute when Lynda Kom tried to flick the ball from Amisha Baxla’s cross from the right but her header was collected by Rupna.

Bangladesh constantly looked to attack down the wing and send in dangerous crosses but the Indian defence, aided by their keeper Anshika, held their ground, thwarting the attacks one after the other.

The Indian U-19 Women’s team progressed to the final of the SAFF U-19 Women’s Championship 2021 after defeating Nepal 1-0 in their last group stage match today (Sunday, December 19, 2021) at the Bir Shreshtha Shaheed Shipahi Mostafa Kamal Stadium, in Dhaka, Bangladesh. Priyangka Devi scored the match-winner in the 66th minute.

It was India, who seized the initiative early, but they failed to capitalise on their chances. Captain Shilky Devi floated a ball from the left in the 19th minute, passed it to Sumati who missed an open chance to find the back of the net.

On the 36th minute, Amisha Baxla went for a first-time shot but failed to connect it properly, as the ball went over the bar. The first half of the game was a rather quiet affair, with both teams creating many chances but failed to disturb the scorers.

The goal for India finally came on the 66th minute, when Sumati Kumari entered the Nepal box from the left, and cut it back for Priyangka, whose shot brushed off a defender, before nestling into the back of the net. The India U-19 Women’s Team suffered a 0-1 defeat at the hands of hosts Bangladesh in their third encounter of the ongoing SAFF U19 Women’s Championship in Dhaka today (December 17, 2021). India had earlier registered comfortable victories against Sri Lanka and Bhutan in the first two matches. Shamsunnahar’s 7th minute strike from the penalty spot made the difference between the two sides.

The first opportunity of the game went to Bangladesh, who were awarded a penalty in the 7th minute which was converted by Shamsunnahar

Although Bangladesh went on an attacking mode and dominated possession after the goal, the Indian Women had an excellent opportunity to restore parity in the 40th minute when Sumati Kumari passed a ball to Mariyammal who took the shot from her left but went straight into the hands of the Bangladesh goalie Rupna.

At the end of the first 45 minutes, the score-line read 1-0 in favour of the hosts. In the 73’ minute Sumati Kumari made another brilliant effort to chip the ball in after her long run, but it went off target.

Ambrose made the last change of the game in the 84th minute when Lynda Kom replaced Mariyammal. India next play Nepal in their last match on Sunday (December 19,2021) wherein a victory will assure them of a place in the final. 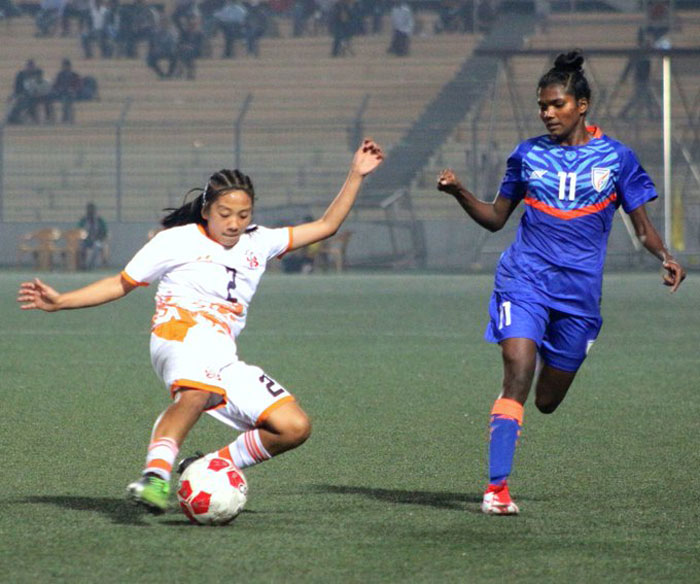 The Indian U-19 Women’s team secured their second consecutive victory in as many matches when they blanked Bhutan 3-0 in the SAFF U19 Women’s Championship in Dhaka today.

India started the match in a dominating fashion. Their hard work and high-pressing bore fruits as early as the 7th minute when Sumati Kumari opened the scoring. A low cross came in from the right via Amisha Baxla, and Sumati was positioned at the far post to put it into the net.

Bhutan tried to get back into the game but they were never able to put the Indian defence under much pressure. Priyangka Devi was the orchestrator in midfield for India, delivering some wonderful set-pieces. In the 17th minute, Priyangka curled in a wonderful corner from the left, and Shilky Devi got on the end of it but her header went off target.

India kept on attacking and eventually found their second goal through another set-piece. This time, India got a free-kick on the edge of the box and Priyangka Devi powered home a swerving left-footer to beat the goalkeeper.

After the break, India continued to put pressure on the rival defence. It paid off when a cross from Kristina Devi in the 53rd minute was put into the net by Priyangka to score her second goal of the game. Mariyammal was booked in the 58th minute.

Lynda Kom had a couple of good chances to score but the Bhutanese goalkeeper produced some fantastic saves to keep her at bay. 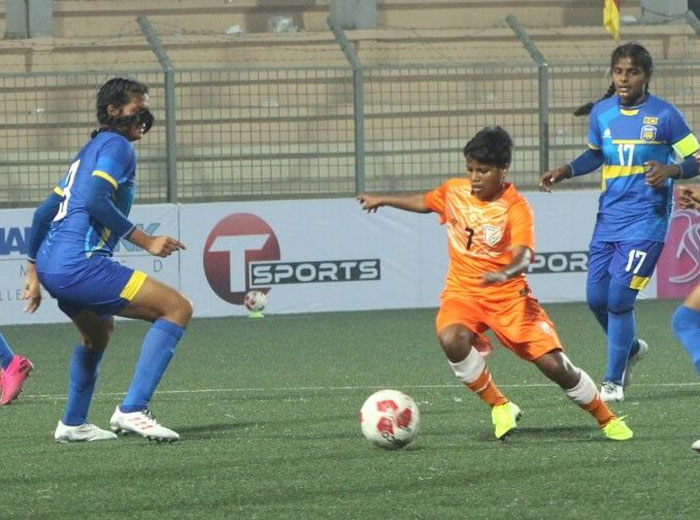 The India U-19 Women’s Team got off to a flying start in the SAFF U-19 Women’s Championship in Dhaka Bangladesh, defeating Sri Lanka by a massive 5-0 margin to lodge their first points of the tournament. Nitu Linda scored two goals for the Alex Ambrose-coached outfit, while Santosh, Karen Estrocio, and Priyanka Devi netted one each to complete the rout for India.