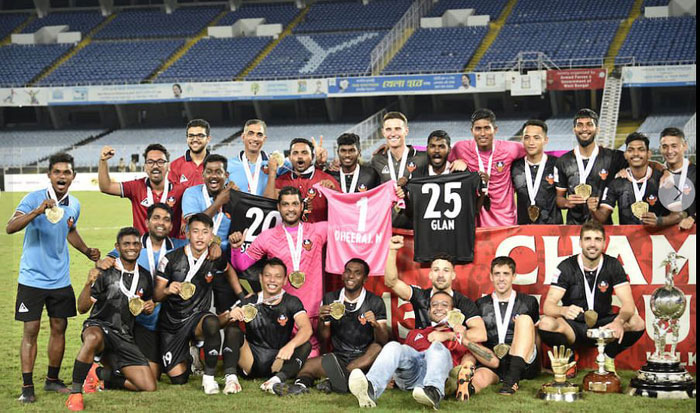 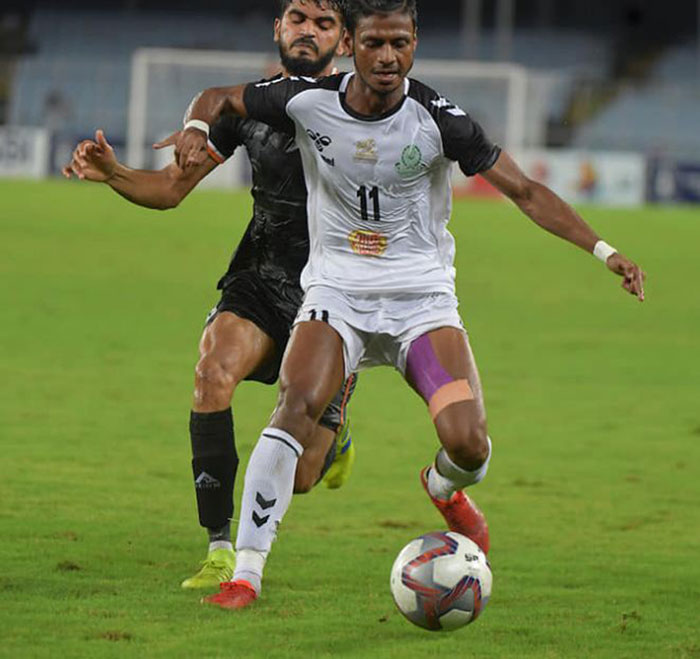 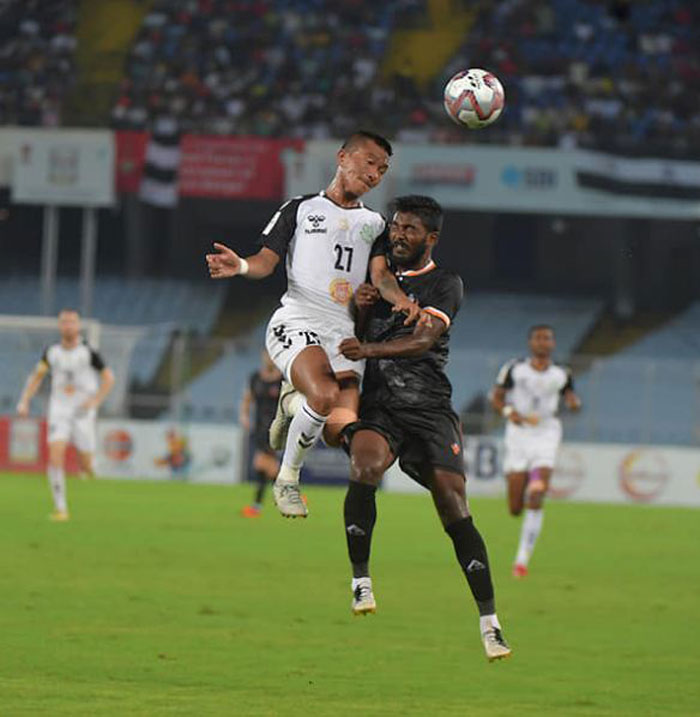 92': A cross from Brandon from the left Naveen collects.
91': First half of extra time starts.
90+3': AT THE END OF 90 MINUTES: MD SPORTING 0-0 FC GOA , MATCH MOVED TO EXTRA TIME
90': 3 minutes added time.
88': Chance for FC Goa, but Devandra shot of a pass from Edu cleared by Shaheen.
86': REPLACEMENT MD SPORTING Faiaz out, Buam in
85': REPLACEMENT FC GOA Redeem in, Romario out.
84': A counter move by Md Sporting down the left , but Ivan denied Faisal.
83': The second session was dominated by FC Goa, Md Sporting could hardly find an opening.
81': If the match ended in a draw in 90 minutes, match will move to extra time .
78': Md Sporting once did not able to got past the FC Goa defenders, as Alberto cleared the ball to safety.
76': A move by Devandra of a pass from Edu, but Shaheen in control of the situation.
74': A lot of miss passes played between the teams 70': Md Sporting yet to create a chance to score as Nikola and Marcus are in the close eye of FC Goa defenders.
67': Alberto's curling corner headed away by Milan out of the danger area.
65': MD SPORTING 0-0 FC GOA
64': Devandra's shot from age of the 18 yards defected of Vaz for a corner.
63': REPLACEMENT MD SPORTING Brandon in, Azhar out. 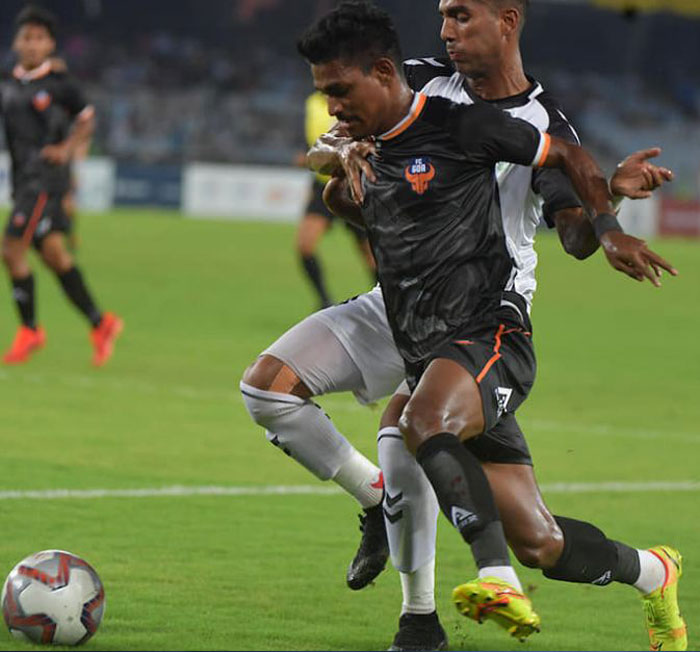 60': FC Goa creating pressure in Md Sporting half, playing in passes to create opening.
57': Leander's cross from the right of a pass from Alberto went wide, no damage done in front of MD Sporting goal.
54': A move by Gama and Nevil down the middle but Nikola tackled Gama, ball cleared to safety.
51': Milan's cross from the left of a defection of FC Goa defense cleared by Leander.
49': Nikola's aimless free kick cleared by FC Goa defense.
48': Marcus was brought down by Nemil, free kick for Md Sporting.
46': Second session starts, Md Sporting kicks off.
HALF TIME SCORE: MD SPORTING 0-0 FC GOA
45+1': Referee blew the whistle for half time.
45+1': Nikola's corner cleared by FC Goa defense.
45': 1 minute added time.
44': A good move by Faisal in sheer speed down the left but Ivan cleared the ball for a corner.
43': Nevil's long ranger of a forward pass from Devendra went far and wide.
40': MD SPORTING 0-0 FC GOA
39': Romario shoots wide of a pass from Devandra, chance wasted by Fc Goa.
36': Neither of the teams could create any positive chace so far in the match.
33': Marcus failed to control the corner from Nikola, ball cleared by Alberto out of the danger zone.
32': Marcus free kick defected of Fc Goa defense for a corner.
30': Nikola was brought down by Ivan, free kick to Md Sporting.
27': YELLOW CARD to Shaheen , he pulled down Devendra from behind.
25': Neither of the teams are to create any opportunity to score.
23': YELLOW CARD to Nikola , rough tackel to Nemil.
20': MD SPORTING 0-0 FC GOA
17': Faisal snatches the ball from Gama inside the FC Goa half but his cross was cleared finally by Alberto.
16': Nevil was in a good position inside the 18 yards, but Shaheen clears the ball finally.
13': YELLOW CARD to Azhar, rough tackel against Devendra.
12': A move by Faiaz and Fiaz down the left but the ball cleared by Ivan.
9': Romario's push of a pass from Alberto from the left went straight to Zothanmawia.
7': Alberto's corner cleared by Md Sporting defense.
6': 1st corner for FC Goa, Devandra was challenged by Vaz, ball rolled over the goal line.
4': Ivan got past two Md Sporting footballers, but Shaheen tackeled him timely.
2': Marcus shoots wide of the target of a square pass from Azhar.
1': A long run by Faiaz down the middle, blocked by Romario finally.
0': Match started, FC Goa kicks off.
*** MAXIMUM OF THE SPECTATORS ARE NOT MAINTAINING THE COVID 19 PORTOCOL AS INSTRUCTED BY THE ADMINISTRATION, THEY ARE WITHOUT FACE MASK IN THE GALLERY

===
MD SPORTING AND FC GOA ARE CONFIDENT OF WINNING THE SUMMIT
2.10.21: The stage is perfectly set to host the 130th Durand final between Mohammedan Sporting and FC Goa.on Sunday evening at Yubabharati Kriangan, Kolkata.

After 1940 and 2013, Mohammedan Sporting are on the threshold of touching yet another milestone of winning the trophy. It has been an impressive performance by the Black Panthers throughout the tournament under Andrey Chernyshov, lost just a group league match on their way to final.

In the semifinal Mohammedan Sporting won by 4-2 against Bengaluru United FC at the added time of the match, while the dedudant in Durand Cup, FC Goa won against Bengaluru FC by sudden death after the match ended 2-2 even at the extra time.

The captain of FC Goa, Edu Bedia did not want to lost the opportunity of winning the trophy in their first appearance in the historic Durand Cup. In a virtual press meeting Edu Bedia said, " We are really motivated heading into the game. We know Mohammedan Sporting is good team with a number of good players. They also play like us. When we are in the final and a chance of winning the trophy, right now we are only thinking about that." FC Goa are still unbeaten in the tournament.

THOUGH THIS IS FC GOA'S FIRST APPEARANCE, THE OTHER CLUBS OF GOA WON DURAND CUP

A lot of enthusiasm created among the supporters and football lovers as all the tickets are sold out from the different counters. As the head coach of Mohammedan Sporting Andrey Chernyshov said, " It will be a very nice evening for the supporters." While interacting he said, " Tommorrow is a big game, we will play gainst one of the best team in India.We respect FC Goa, but we are not afraid, because we know how strong we are. "

The match is schuduled at 6PM which will be followed by a gala prize dristribution ceremony. 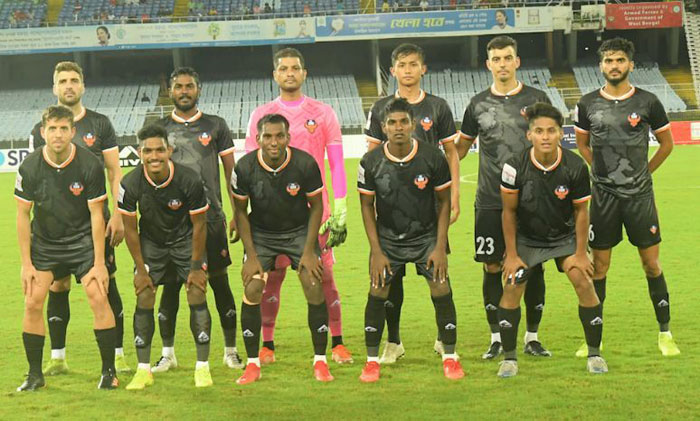 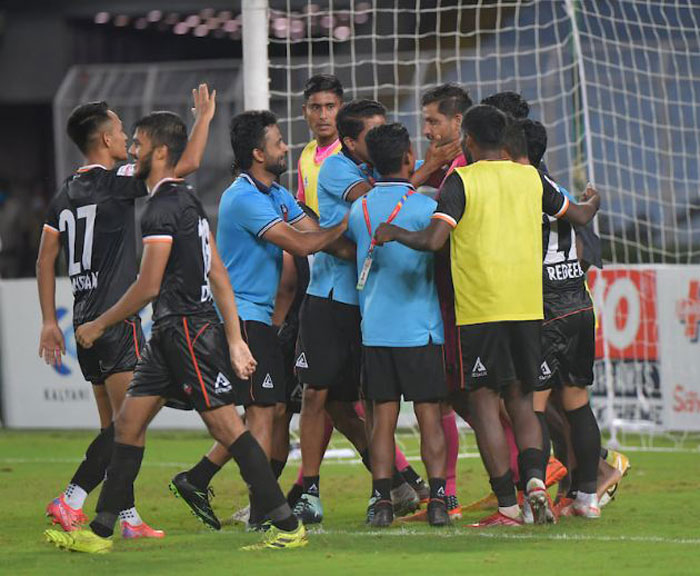 FC Goa eked out a narrow 7-6 victory after a sudden-death tie-breaker over Bengaluru FC (BFC), to make it to their maiden Durand Cup final in a gripping second semi-final played at the Vivekananda Yuba Bharati Krirangan (VYBK), Kolkata, on Wednesday evening. The game ended 2-2 after extra time. They now come up against local favourites Mohammedan Sporting (MDSP) in the final of the 130th edition of the iconic tournament, Asia’s oldest and the world’s third oldest. Coincidentally both the semi-finals ended the same way after 90 minutes.

Christy Davis took the deciding spot-kick in sudden death which saw the Gaurs through as DamaitphangLyngdoh missed for BFC,after both teams were tied 4-4 after the first five stipulated spot-kicks. For Goa, the scorers in the shoot-out were AibanbhaDohling, Sanson Pereira, Leander D’Cunha, Edu Bedia, Papuia and MakanChothe, besides Christy. For BFC the ones to score were Muirang, Ajay Chhetri, Parag Satish, NamgyalBhutia, Ajith Kumar and BekeyOram. The one’s to miss out were Redeem Tlang for Goa and Akashdeep Singh and Lyngdoh for Benagluru.

In regulation time Devendra Murgaokar and Redeem Tlang had scored in each half for the Gaurs while Siva Sakti got both goals for BFC. 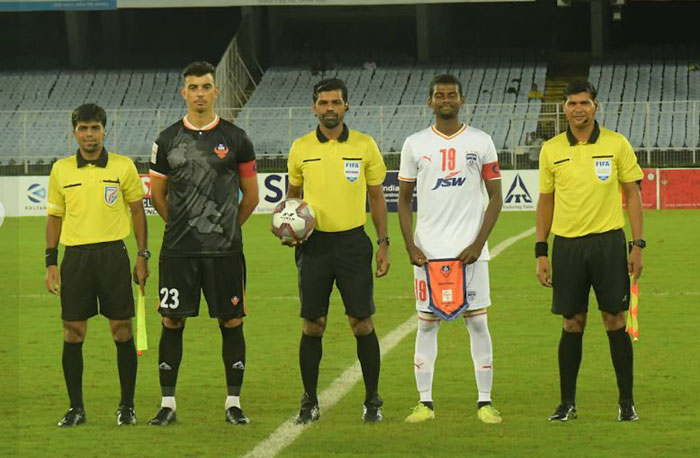 Goa gaffer Juan Ferrando went into the game with a five-man back line, probably insurance for the fact that he was missing key players like Brandon Fernandez, Glan Martins and Sertion Fernandez, all now on India duty. Naushad Moosa, the BFC coach was the more enterprising, opting for a three-man forward line and going in without a central mid-fielder.

It was yet another goal in the first minute for the second semi-final running. Siva Sakthi took BFC to a flying start, thanks to a shocker by Goa keeper Navin Kumar. Goa bounced back almost immediately. A smartly taken training-ground short corner which Nemil put in the path of Devendra Murgaokar who deflected it past Lara in the BFC goal. This was Murgaokar’s fifth of the tournament and his stature continues to rise with every passing game.

Thereafter it was all Goa in the half and the Gaurs should have taken an unassaible lead but for the wastefulness from the likes of Edu Bedia and Nemil in front of the goal. The half ended even-stevens.

Goa had the upper-hand in the second half as well and finally Redeem Tlang, who had just come in as part of a triple change by Coach Juan Ferrando, put them ahead. He would owe it all to Spanish playmaker Alberto Noguera Ripoll as his piercing run at the BFC defence found him in space and the former Shillong Lajong man made no mistake with a scorching left-footer which whizzed past Lara.

BFC to their credit kept moving forward and found reward 11 minutes later when a move from the right flank by Namgyal Bhutia and his subsequent cross saw Siva Sakti leaping above the Goan defence for his second of the game.


MOHAMMEDAN SPORTING ARE IN THE FINAL OF 130TH DURAND CUP 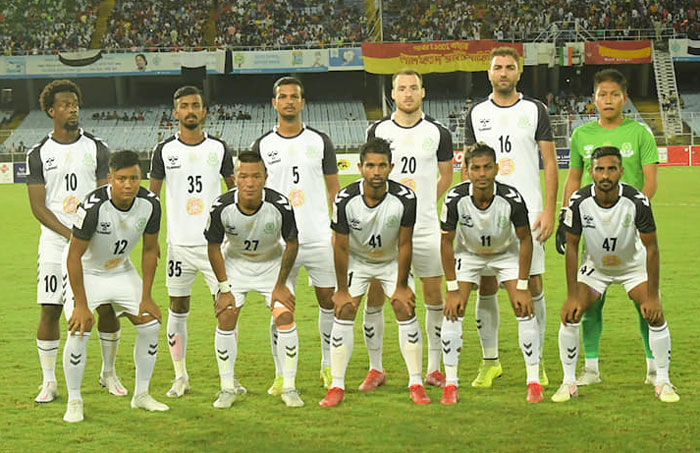 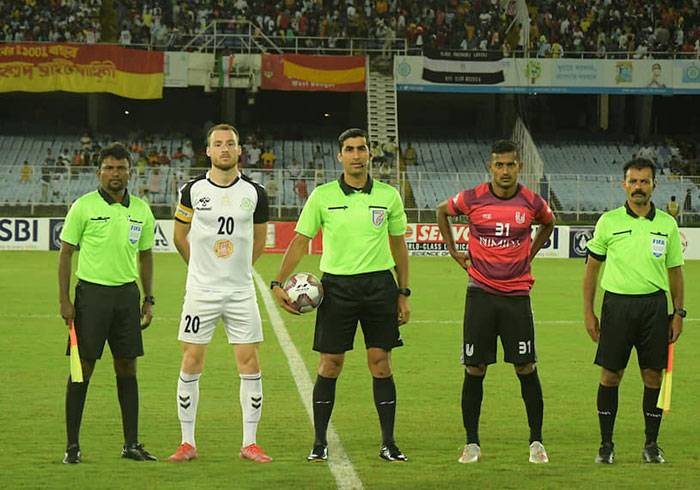 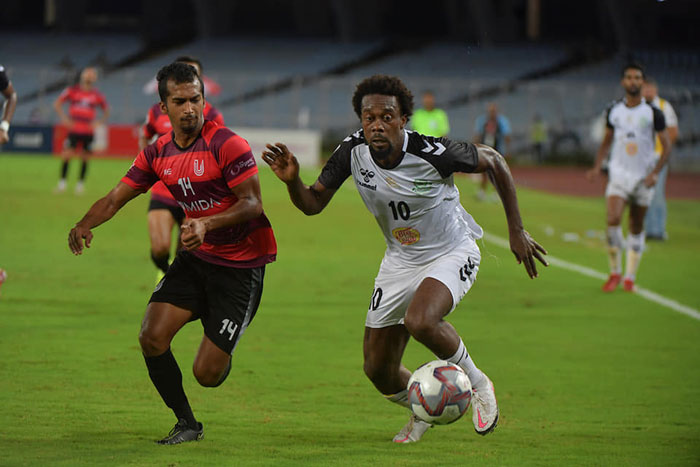